August 4, 2020. A scramble to the summit of a distinctive mountain in the Castle Wilderness. (IMPORTANT UPDATE: June 27, 2021 – see the comment section regarding changes to the access for this scramble. Big thank you to Dave for letting me know.) 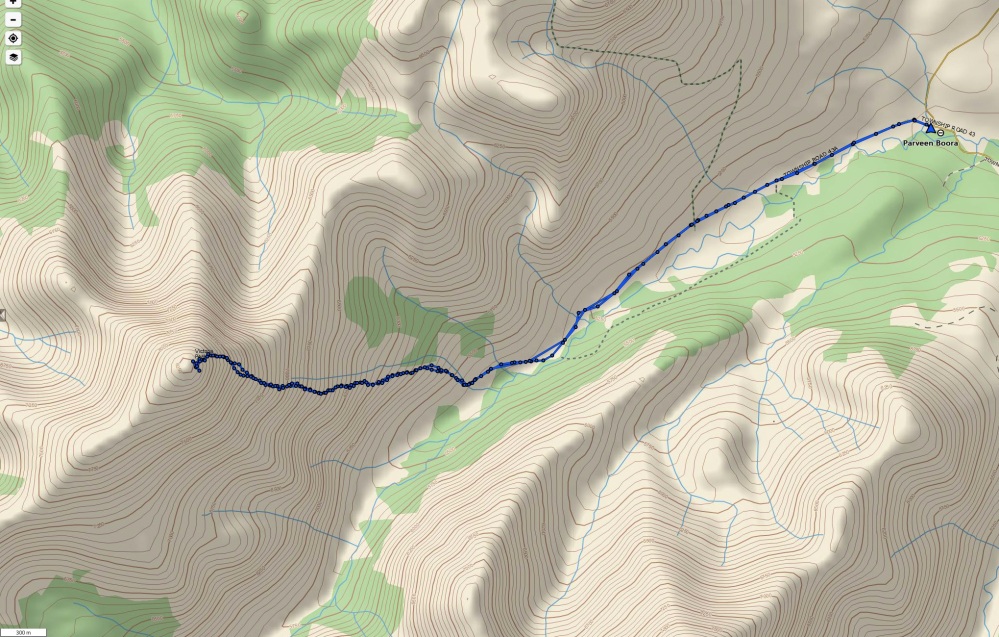 Victoria Peak has been on my mind as an objective since I moved back to Southern Alberta a few years ago. It has a distinctive fang-tooth shape when seen from the east, and it’s visible from my neighbourhood in Lethbridge. A variety of routes are possible. Nugara describes a moderate-difficulty scrambling route in More Scrambles in the Canadian Rockies, and Bob Spirko‘s route seemed to follow a somewhat similar line – though his trip involved a visit to a rock window below the peak. Other routes involve an approach from the south or west along less rocky, but nevertheless steep terrain. I read a particularly impressive blog post by an 11 year-old describing an 11 hour trip plagued with route-finding challenges. I ended up taking a route up the east slopes that was similar to Nugara’s and Spirko’s. It involved a bare minimum of bushwhacking and plenty of great rocky scenery.

[Note: this paragraph is outdated. See Dave’s comment below regarding access without crossing private property. When I get a chance I’ll scout out the route from Butcher Lake and update this] Access is from the same trailhead as Victoria Ridge. The trail begins a short drive beyond the Shell Waterton Gas Plant, south of Pincher Creek, Alberta. Ask Google Maps to drop a pin on 49.310219, -114.077177, and it’ll direct you right to it. Park in the grassy area south of the road just outside the facility. About 50m beyond this, the road is obstructed by a locked gate. When I last visited, the pedestrian gate to the right of the main gate was chained but not locked. This time, there was a lock on the chain. There was no signage to suggest access rules had changed – no “No Trespassing” signs, and the map kiosk for Pincher Ridge was still there. I assume the lock was put in place to keep motorbikes out – it’s still easy to duck under the gate or climb over. I brought my bike for the first part of the trip, so I just lifted it over the fence.

I biked the road almost all the way to where it ends in a big gravel area with a shed and a flare stack at 3.7km. Just before the trail descended to that area, I could see clear slopes to my right, heading up to a line of trees sitting on the edge of the large gully that splits the eastern face of the mountain. My plan was to follow the edge of the gully for the first part of my ascent, keeping the trees to my right as per Nugara’s description. There was actually a little cairn off to the side of the road marking the best place to begin ascending. Right away you need to go through a small area of bushwhacking to get across a little creek. It’s best to cross the creek and its gully immediately because the further upslope you go, the deeper and steeper the gully becomes.

Once on the open slopes, I headed to the line of trees and followed it up. The terrain was relentlessly steep, so when I finally got to rockier ground it was a nice relief for my feet. The line of trees eventually intersected with steep rocky terrain. I carried on along the same line. Eventually my line of ascent took me steeply uphill through the trees for some distance. In retrospect it would have been easier to deviate right before reaching this point, toward the gully, to pass to the other side of the trees so it would be easier to see where I was going. On my descent I even noticed a small cairn that, in retrospect, marked a good spot to cut over.

In any event, I eventually got above this last patch of trees and followed the foot of a white rock band to the right and passed through at a very obvious weakness. This spot was basically the top of the huge gully which I’d been following the edge of. Beyond the white rocks, I carried on up some scree, then through additional rock bands. Finding reasonably easy places to climb, my path seemed to go generally towards the right. Eventually a lichen-covered black rock pinnacle came into view and I headed towards it. It turns out this wasn’t the summit, but below it and to the right was the rock window described by Spirko.

From there I traversed left and around the corner of the large block of black rock. There was one area with narrow footing with a bit of mild exposure below it, but nothing difficult. Eventually I found a weakness that looked like I could safely ascend and descend. Climbing up I was on the summit ridge and made the short walk to the summit marker.

The summit was wide and almost completely free of wind – definitely an unusual situation in the Castle. There was some haze in the air, but I still had distant views in all directions. The highlight, as is frequently the case in the area, were the views of Castle Peak and Windsor Mountain just across the valley to the west. I had the mountain to myself, and spent a nice long time on the summit.

I descended along the same route, except I decided to explore a little further along the summit ridge to see if there was another spot I could have climbed up. There was another area that was mostly steep rubble and I did descend that (very slowly, and keeping to secure rocky footing I could re-climb since I wasn’t 100% sure what was at the bottom). This took me to a spot a little way beyond where I had traversed to when I found the weakness in the black rock that I ascended. All things considered, I much preferred my original ascent route.

I very thoroughly enjoyed this scramble, and could hardly have asked for a better day to ascend. I’m quite sure I’ll return.