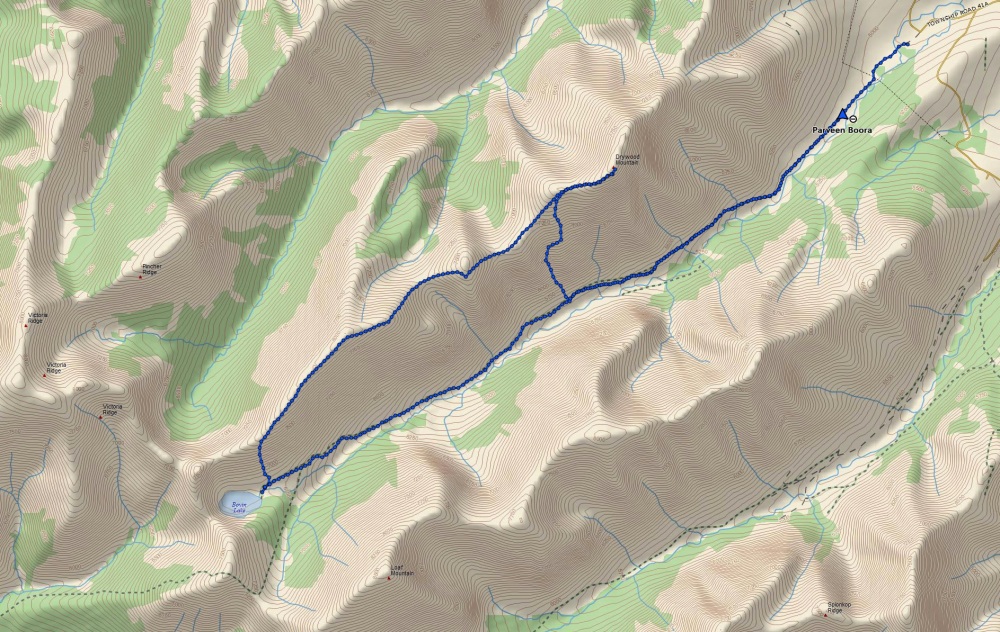 Climbing Pincher Ridge last week, I spent a lot of time staring south across the valley at neighbouring Drywood Mountain and its ridge. Looking through the available information, I found that there are scrambling routes to Drywood’s summit from the north and the south side, but that the southern approach is considered more scenic. On top of that, the southern approach uses the same access trail as Bovin Lake. This meant that after tagging the summit, one could then walk the length of Drywood’s ridge before descending at Bovin Lake and following the trail in the valley bottom back to the parking area – a big loop.

Nugara’s More Scrambles in the Canadian Rockies describes a “moderate” scrambling route with one stretch of potentially difficult scrambling. The route description was appealing, heading pretty directly up to the summit, but I decided it wasn’t right for me as a solo trip. Instead, I decided on a route that followed one of the tracks on the Topo Maps Canada app. This route seemed to involve only easy scrambling but was slightly less direct, requiring a bit of back-tracking to tag the summit.

Access is the same as for Bovin Lake and Loaf Mountain: Go south from Pincher Creek on Hwy 6, turn onto the Shell Waterton Complex Road and drive past the complex. Where the road branches, turn left (Forest Reserve sign) – this is Twp Rd 4-3. Follow this about 3.8 km to Butcher Lake and turn left onto Rge. Rd 1-2a. Drive 1.4 km and turn left onto Twp. Rd. 4-2. Follow that 5km (you’ll pass by Bathing Lake) and then turn right. You’ll immediately be faced with the locked gate. If you enter these coordinates into Google Maps: 49.272782, -114.019878 it’ll drop a pin on the parking area.

The gate at this parking area used to be opened after June 15, but is now permanently closed. Bicycles are allowed, though, so I decided to bike the 4 km to the end of the gravel road beyond the gate to reach the start of the “real” hiking trail. As is often the case when I bike and hike, at the start of my trip I questioned the wisdom of starting off the day by tiring my legs out with an uphill bicycle ride into the wind (I think cyclists have some sort of crazy specialized anatomy and physiology – this is why they’re all built like Spider-Man). However, at the end of this long day I was very happy to be able to coast the last 4km back to may car.

Once on the dirt trail to Bovin Lake, I hiked a little over 1km watching for the ascent drainage to my right. The one I was looking for was a few hundred meters past a distinctive dead tree on a boulder (see the picture gallery below). The drainage is wide and obvious, with dark grey rocks and rubble. Climbing up, I passed some areas of underbrush and stayed to the left. Eventually I had to move off the creek bed a little and crash through some bushes before reaching open grassy slopes. Ahead there was a lovely little waterfall in a gully.

To the left of the waterfall there were some rubble slopes that were easy to ascend, as well as some options for fun and easy scrambling up rocky areas. Once past the waterfall, I started traversing to the right, passing in front of a rocky outcrop. Continuing to ascend I eventually saw the false summit. As soon as I was at this point, up on the ridge, the wind hit me – very cold and strong. I ended up taking cover behind some short trees until it died down a bit. Carrying on in toque, gloves and two layers, I continued toward the false summit and soon saw the black rocks of the true summit beyond.

There was a bit of a narrow ridge to cross between the false summit and summit. The wind was gusting strong at that point and the ridge felt a little exposed. I was crawling in a couple spots because I felt like I’d get blown over. Finally, I reached at the summit cairn and survey marker. It took about 3 hours from my car – that time includes a lot of time down in the gully admiring the waterfall from various angles.

The summit cairn was arranged as a little wall, which gave some welcome respite from the wind. A yellow weather-proof canister behind the wall held the summit register.

After huddling behind the wall and eating my lunch I set out along the ridge-top. The full length of the ridge from the summit to the slopes above Bovin Lake is about 5.7 km. There’s a significant elevation loss followed by gains, eventually reaching the high point of the ridge, which turns out to be slightly higher than the official summit. Along the way I enjoyed the usual spectacular views offered by the Castle region.

Eventually, I reached the end of the ridge walk above Bovin Lake. I think it’s possible to continue along the ridge to connect with Pincher Ridge to the north or Loaf Mountain to the south (I’m not sure how difficult the terrain would be). Looking down and to the left, I had a great view of Bovin Lake and the open slopes descending from the ridge. I picked a line of descent that I could see all the way down, then descended quickly and easily to the valley bottom. Some brief bush-whacking brought me to the Bovin Lake trail. I walked over to the lake for a little break before returning along the valley bottom to my bike.