July 22, 2018. An easy scramble to the summit of Lakeview Ridge at the eastern edge of Waterton Lakes National Park.

Although I’ve been visiting Waterton since childhood, I’ve never explored the area around the bison paddock. This section of the park is at the eastern boundary and accessed by a different turn-off than the main park gate. There’s a viewpoint there which is as far as most people explore. However, the road continues beyond the viewpoint to the start of the Horseshoe Basin Trail. My main interest in that trail was as a potential snowshoeing trip in the winter, but I also knew of a couple of scrambles that could be accessed via that trail, including Lakeview Ridge.

Lakeview Ridge consists of 2 parallel north-south aligned ridge lines connected by a col at the northern end. Both ridge lines are scrambling objectives, but I decided to go to the highest point, which is on the western ridge line. Bob Spirko describes a good route on his blog which uses the Horseshoe Basin Trail for an approach and descent.

Access to the Horseshoe Basin Trail is via a turn-off from Hwy 6, 1 km north of the main park access road for Waterton Lakes National Park. The turn-off leads to a viewpoint loop, with a road continuing from its northern end which abruptly turns west and descends to the area of the bison paddock. Past the paddock, the road ends at a locked gate, where the Horseshoe Basin Trail begins (ask Google Maps to drop a pin here: 49.132256, -113.871124). The trail goes around a slough and skirts some trees before presenting you with a sign and a fork: Horseshoe Basin Trail forms a 20.8 km loop. I went left (west) and encountered another fork after 600 m, where a trail to the Red Rock Parkway diverges to the left and Horseshoe Basin Trail continues to the right. Heading right, I followed the trail as it ascended towards Horseshoe Basin. Once up at the level of the basin, there were some very nice views of Bellevue Hill, Mount Galwey and the southern outlier of Mount Dungarvan that Andrew Nugara refers to as Mount “Dunwey” or “Rogan Peak”.

As the trail heads west, it passes between Bellevue Hill on the left and the southern extent of Lakeview Ridge on the right. This southern spur is where I ascended to the ridge-top.  A small berm blocks the direct path between the trail and the ridge and is best circumvented rather than climbed. To do so, I followed the trail to where it crossed a creek bed (dry at this time of year). There, I left the trail and followed the path of the creek to the right where it soon hooked around the berm and brought me to the base of the ridge. I scrambled up at this point. There was nothing too challenging, it was just steep hiking. Once on the ridge top I just followed it north to the summit, approximately 2 km away. The summit was marked with a small cairn and a broken survey marker. Distance from my car to the summit was 7.1 km. Summit elevation was measured at 1930m. It took me 2h 26m.

The views from the ridge were very nice, mostly showing off Mount Galwey and Mount Dungarvan as well as the southern ridges and peaks of the Castle Wilderness. Last year’s Kenow fire had made its mark in the area. Purple fireweed was blooming everywhere amongst vast stands of burned trees.

I continued following the ridge to the northwest for my descent. This area was a little steeper than the rest of the ridge but presented no problems. As I descended, I could make out the Horseshoe basin trail zig-zagging its way up to the col between Lakeview Ridge and Dungarvan’s southern outlier. The ridge line met the col and I was back on the trail. I turned left and followed it south back down into Horseshoe Basin, then carried on all the way back to the parking area.

Total distance was 17.5 km. Total ascent was 762 m. Round-trip time was 4h 56m. Click on the pictures below for full-sized images. 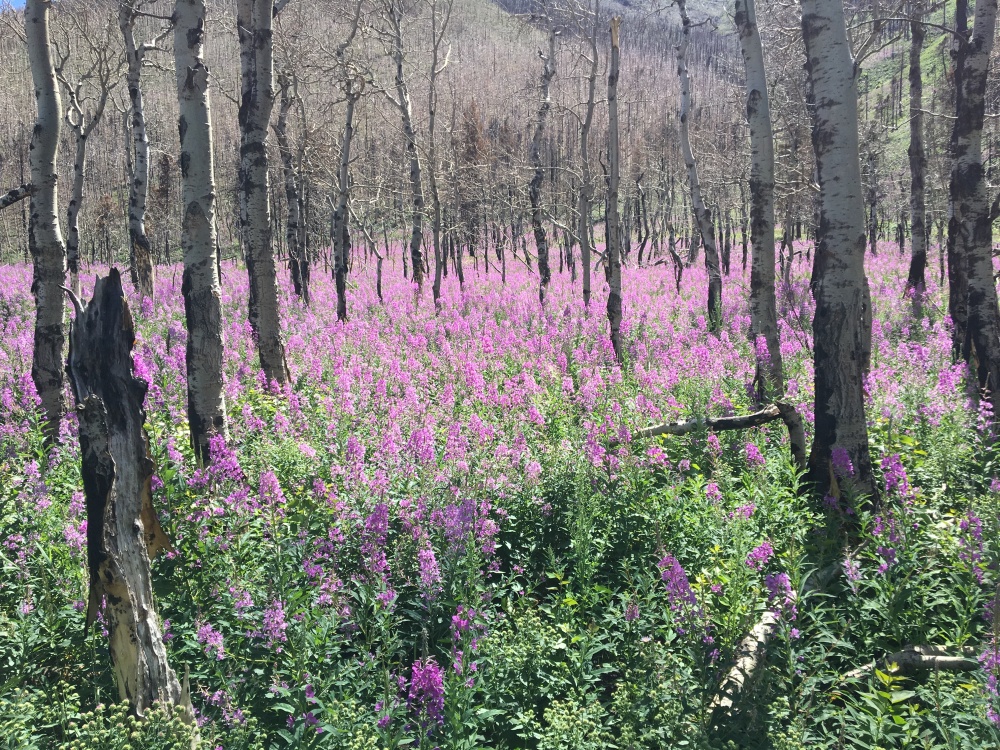